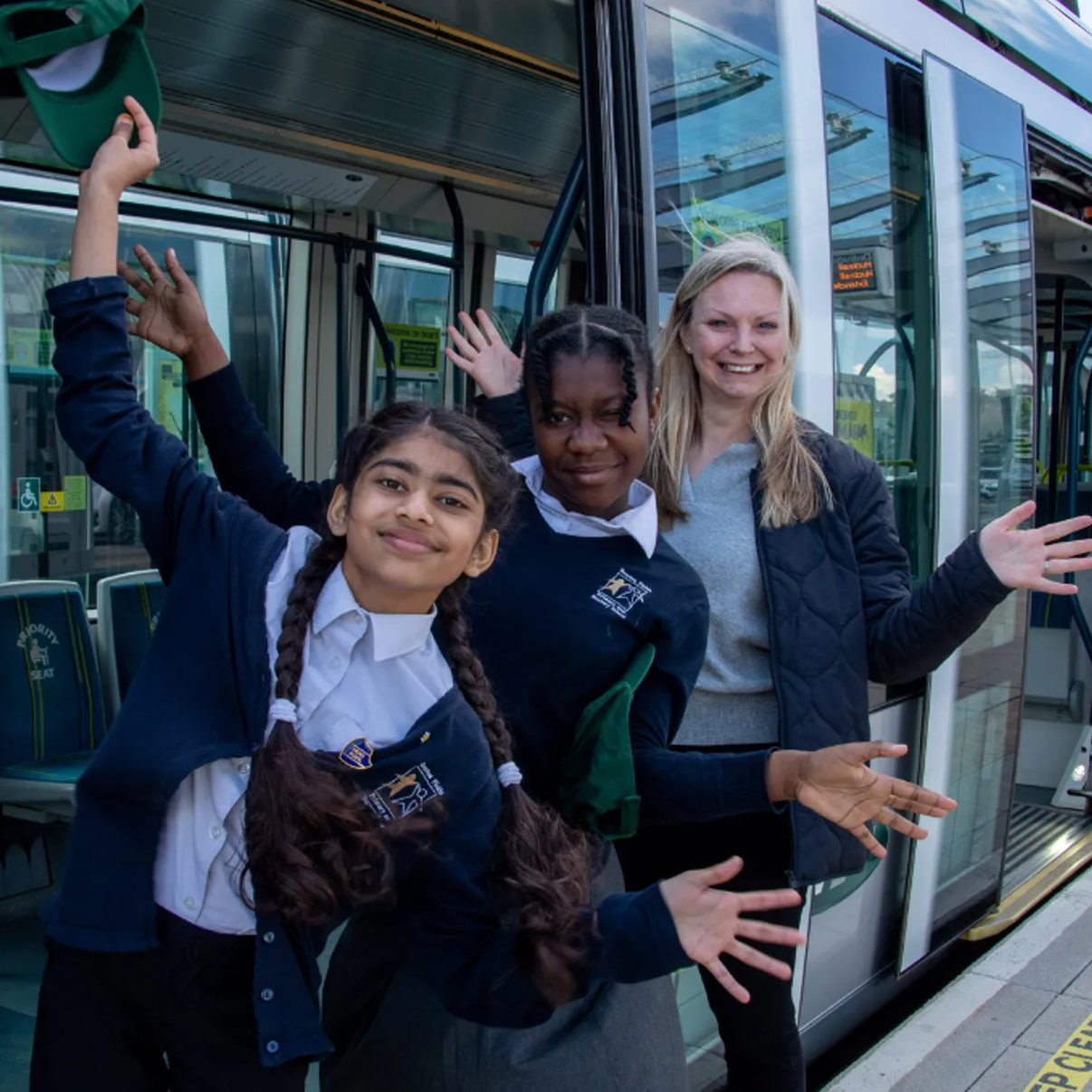 Children from Beeston Fields Primary & Nursery School were given special access to one of Nottingham’s NET trams to film a video that will be shown at the Flying High Trust Awards event at the Motorpoint Arena in July.

Tramlink reserved a stationary Tram to be available at the Toton Lane stop and for the children and members of their multi-academy trust team to film the video. Tramlink are also one of the sponsors the massive event which will see 30 schools from Nottinghamshire and Derbyshire come together for the glittering awards, with schools performing music and dance pieces on stage or in the audience.

Alison Sweeney, Marketing Manager at Tramlink said they were pleased to support the children’s filming: “We were thrilled that the children could use one of our trams as their recording studio and we can’t wait to see the results on the awards night.

“We value local partnerships with organisations such as the Flying High Trust and are proud of the role we play in the City, especially with schools. Pupils from Alderman Pounder Infant and Nursery School became our first ‘Trambassadors’, acting as an important community link for us and providing STEM and safety learning opportunities for the children.

“We will continue to work closely with schools, so we ensure the tram always does the best job possible for the communities it serves.”

Pupil Qirat Najam Khan (Year 6) said filming their video on the Tram was fun. “It was great to have the whole tram to ourselves as we’ve never been on our own on one before. The tram was huge, and it was a fun and new experience! We loved the process of filming– it was fun doing the comedy sketch! We both had great lines to say and a funny salsa dance.”

Pupil Theodora Onuoha (Year 6) agreed saying, “Yes, we were super happy, as it wasn’t anything like we’d done before. We are both really looking forward to the awards event, – there are so many fun things that are happening on the night. We are not nervous, -we are looking forward to it. On the night we are doing some more comedy and even presenting awards and hopefully receiving one too!”

Chris Wheatley OBE is CEO of The Flying High Partnership and said he was grateful to Tramlink. “What a fantastic opportunity this has been, not only as a Trust, but especially for the children filming the opening titles to our Trust Awards 2022 event. Tramlink really went the extra mile in making their film extra special and we cannot thank the team at Tramlink enough for this opportunity.”

END_OF_DOCUMENT_TOKEN_TO_BE_REPLACED

Tramlink has today announced they will be providing free tram travel for 360 children who are accessing the Government’s Holiday Activities and Food (HAF) programme in Nottingham this summer.

END_OF_DOCUMENT_TOKEN_TO_BE_REPLACED

Nottingham’s trams on track for trio of awards

Nottingham’s popular tram network is in the running for no less than three prestigious awards at a high-profile event that celebrates excellence across the light rail sector.

A raft of initiatives...